There was a point in time when a certain hue was widely accepted as a means of protecting one’s home from the threat of spirits entering. The theory holds that these ghosts, called haints, cannot cross water. Thus, painting the exterior of a structure the color of water will trick these malicious haints into staying out.

So where does this theory come from?

There is more than one source to credit the tradition of using this aquamarine tint of blue to keep the restless spirits away. Living in the deep South, I often hear the Gullah people and Hoodoo practitioners originated this custom, with enslaved people of the region first using the color on their homes.

The practice of painting window trim, doors, porches or entire façades of a home to ward off spirits can also be found among Native American cultures as well as in Indonesia, Haiti and parts of the Mediterranean. There is no single culture origin but in Savannah, I would definitely say it has roots in Hoodoo (may have intended that pun!) and the Gullah community.

What kind of blue is haint blue?

Typically, the color is a pale aquamarine shade but research has found that haint blue can be an umbrella term for a variety of similar shades, some more grey or green looking. The shades may vary by region but are overall within a close spectrum. Below is a color chart I found to provide a visual representation of the differences that are all considered haint blue.

Another explanation for the prominence of the color throughout the Lowcountry is that it keeps away mosquitoes. Early versions of haint blue paint (well many paints, for that matter) were mixed with lime, which acts as a natural deterrent to pests such as mosquitoes. Paints like this were mixed by hand and needed to be redone frequently when the color started to fade, keeping the color- and by default, the insect repellent- fresh. Modern paints do not have the same chemistry so it is unlikely that the color itself will keep bugs away.  But if keeping evil spirits and evil insects away isn’t enough, modern day advocates of the color describe it as a way to make a porch ceiling look higher by blending it with the color of the sky. Regardless, haint blue is truly an aesthetically pleasing color whether used as an accent or main color.

Using this color on your home today is much easier than mixing your own paint by hand with pigment powders and lime. Many companies have lines featuring historic colors. Valspar worked with the National Trust for Historic Preservation to create a color chart of 250 historic hues. Sherwin Williams had a color palette of Historic Charleston colors and while I was in a paint analysis class at SCAD, we collaborated with them to create a Historic Savannah palette, but an internet search has turned up nothing on either. They do, however, have a line of historic colors and it appears there are some haint blue tones. Duron and Benjamin Moore also have historic color lines that are a result from paint analysis at various historic sites. So there is no lack of finding your perfect shade of haint blue if that is the route you’re going. Something really awesome that can also be done is taking an existing paint sample to a paint retailer where they will be able to scan it with a colorimeter ( a device that will match your sample to create a custom paint color) to give you an exact match. That is some serious accuracy.

Although haint blue can be found all over the Lowcountry, here are some examples from my porch of spirit protection in action. 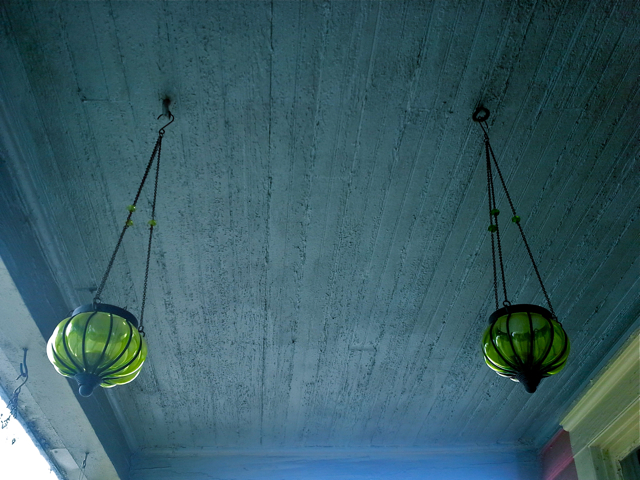 And just to show how it’s done, above is a sample from the plaster cornice over the front door in the entry hall of the Gwathney House (401 East Broughton Street) in Savannah. This is a very small sample with a magnification of 5.6 using a DinoScope. We found 7 different layers of paint, the first one being a bluish white and a later layer of a white bluish grey. The very first layer of paint is incredibly thin but I always thought it looked to be a haint blue, given that paint colors fade over time and this may have been a more brilliant aqua shade. Of course I can only theorize using the information available but in an upstairs room in the wall, a small mojo bag was found by another student, furthering the evidence of hoodoo influence in this house.

I really do think haint blue was used on interiors too, based on my own observations. That would be a whole other post though so I’m not going to get into it here. Maybe I will do another one about interior historic paints soon. In any case, keep an eye out for haint blue in your area, whether in the south or not. It is amazing to me just how often I see it when I am not even looking for it. Thanks for reading and I will have a new post about Savannah’s history next Saturday.